If you are a long time and mid age east coast resident, you may very well remember the blizzard of 77. I was born during this blizzard, and have heard my parents talk about this blizzard all of my life. Yet the storm that is due to hit the east coast today, Winter Storm Jonas , is expected to surpass the blizzard of 77, not due to sheer snowfall, but due to how many states it is expected to affect. Winter Storm Jonas is due to affect 75 millions Americans, across 15 states, from Washington D.c, Atlantic City, Philadelphia, Boston to Richmond are all going to be hit by Winter Storm Jonas. 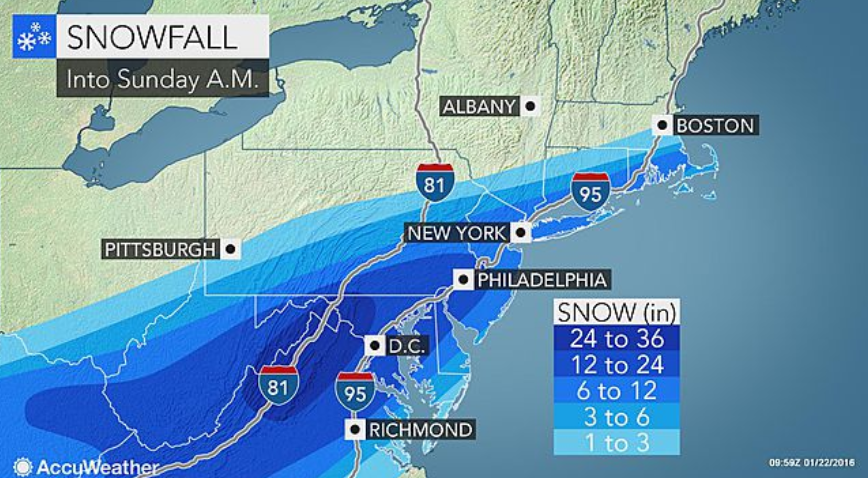 If you live on the East Coast, be prepared for the upcoming storm. Have in place a plan if utilities fail. Make sure to have groceries stocked up to last you three to five days. If you have prescription medication due to be filled, make sure and fill it today, you may not get the chance for three to five days. Do make sure to have candles or plenty of flashlight batteries available, as this storm is expected to knock out power for millions of Americans on the east coast.

This winter storm will be like no other in recent memory, so please be prepared. We want everyone reading this on the East coast to be prepared. It is human nature to wish away ills, and to expect the worse to happen to the ” other guy “, yet millions of Americans will be ” the other guy”. Do carry on hand flash light batteries, food stores, water, a snow shovel or gas for your snow blower, emergency plans should utilities fail, and be prepared for several days of being home bound if you are in the heart of Winter Storm Jonas. You should also have on hand your property insurance information or your renter insurance information.

While much of the media coverage has been focused on the North East, this storm is going to affect a much larger swath of the nation than just the North East. Kentucky for example is going to experience heavy ice and snow, while other southern states like Arkansas and Georgia are going to be hit with freezing rain as precipitation changes to snow or rain. Upstate South Carolina is due to receive at least 1/4 inch or more of damaging ice. Southern states are going to be especially hard hit by Winter Storm Jonas, as these states are not prepared to deal with winter storms. Southern states will struggle to remove this snowfall and ice from roads and streets, making driving impossible in these states. Air traffic will also grind to a halt in the states where Winter Storm Jonas is due to show it’s wrath.