If you live on the west coast, you should get ready for El Niño rains as early as later this month. With the record storms that have been striking the United States, this years El Niño season could be a record breaking season as far as heavy rains and flooding are concerned. In fact FEMA is already urging anyone in California to buy flood insurance. 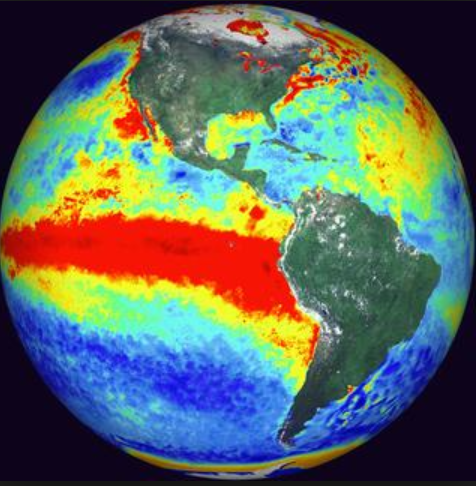 While California and other parts of the west coast are experiencing a record drought, this years El Niño season promises to bring record rains. This is largely due to the tropical East Pacific, specifically the fact that there has been no net warming there from 1998 to 2014, while the Tropical West Pacific is already much warmer than average, leading to a West Pacific to East Pacific temperature differential. This has caused the Pacific to enter into a long lasting “La Niña-like” state, ever since the 1997 to 1998 El Nino.

What is alarming is that the East Pacific has finally built up considerable tropical and extra tropical warmth, not seen since the record breaking El Niño and strongest El Niño on record in 1997-1998. The process started in 2014 when the East Pacific began to build up massive warmth, and this has only increased in 2015. Forecasts are predicting rather a strong El Niño season. While it is true that last year a strong El Niño season was predicted, which never came to pass, the conditions are now ripe for the perfect El Niño to form.

Even the atmosphere is pointing towards a record El Niño season that is likely to bring record flooding to the West Coast. The atmosphere is showing its strongest ever El Niño-like circulation pattern, the likes of which have never been observed during any summer months, so this should be alarming to anyone on the West Coast. In fact just about every tropical cyclone record has been broken over the last six months, which is also alarming. At one point we had 3 active and major hurricanes between the Central and Eastern Pacific, and this too has never before happened.

Fema is already warning residents on the West Coast to prepare for the worst. “If there was ever a time to buy flood insurance, this is the time,” said Roy Wright, FEMA’s deputy associate administrator for insurance and mitigation. If you delay getting flood insurance you could be sorry, since you cannot get it last moment. Flood insurance, like most insurance has a wait period, in this case it is a 30 day wait period.

Areas of the west Coast have already received just a taste of this El Niño season, such as California, where torrential rains caused mudslides in both Antelope Valley and Lake Hughes. Entire cars and trucks were utterly buried in mudslides on both the Interstate 5 and the 58 Freeway. Indeed experts are predicting the potential for record flooding on the West Coast, are you prepared? Do you have plans in place should the worst happen?