Severe Weather to Tear Through United States This Week

The severe weather threat is predicted to increase on Friday and Saturday throughout the Plains states, and the greatest risk for many of the communities involved will be dangerous flooding.

As we move into the weekend, drenching rain and thunderstorms will take its aim at the Plains yet again, possibly bringing several inches of rain to areas that are already saturated due to prior heavy rains. The areas that will be the most effected will be from Oklahoma to Texas, and those are also the states that are most likely to experience minor to severe flooding due to the large amounts of rain that have fallen over the past week.

Areas such as Oklahoma City, Dallas, and Kansas City will be next in line for drenching downpours on Friday and Saturday, while Thursday is expected to stay relatively dry.  Oklahoma City has already endured 12 inches of rain so far this month, so any type of heavy rainfall could quickly cause some flooding problems.

There is more than one concern with these systems though, and it is that the storm systems may also be slow-moving. This means that there is a greater chance for flood-like conditions to occur. Any of these thunderstorms could have the ability to bring rainfall rates of more than an inch an hour. Also, a lot of the rivers and streams are still running quite high from the massive amount of rain last week, and more rain will obviously only make matters worse.

Many of the river gauges located across southern Oklahoma to eastern Texas and Arkansas have already reported flooding. A small portion of the Red River, located around Gainesville, TX, is well above the flood stage. Even though the most concentrated storms will be centered around Texas and Oklahoma, there is still a chance that isolated storms could cause problems in other areas as well. 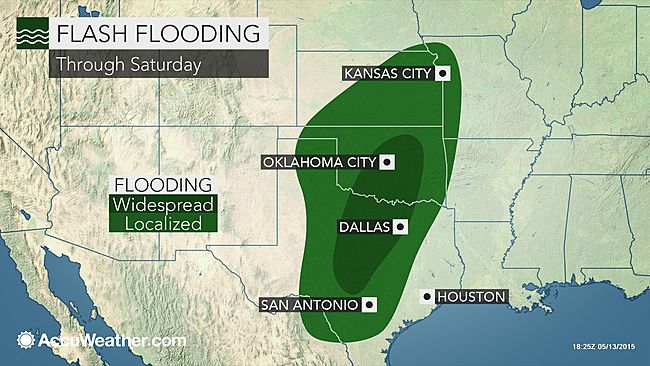 There were a couple of heavy thunderstorms that occurred earlier in the week, and had brought the water levels of the West Fork San Jacinto River to major flood status. This means that major flooding can be expected to continue through the end of the week once the river crests.

Motorists will want to be especially careful of driving conditions on Friday and Saturday, as the roadways can quickly turn into rivers once heavy downpours occur. Trying to make your way through the high water could be life threatening, and this is due to the fact that water is usually deeper than it appears, and the vehicle that you are in could easily be swept away.

Just 12 inches of rushing water can carry away a small car, and 2 feet can carry away almost any vehicle. Any residents living near rivers or streams will want to stay on high alert and be ready to move to higher ground if need be. Out of all of the natural disasters that occur each year, flooding tops the list with the most deaths each year.

Unfortunately, this wet weather could possibly extend into next week as a front heads into the area and another system begins to make its way through the region. Stay updated on your local forecast with The Weather Channel, Accuweather, or your local weather source. When severe weather is in the forecast, it is important to stay ahead of the storms so that you can be prepared to take shelter or move to higher ground.