Residents along the southeastern coast can expect high winds, seas, and surf this week. There is a tropical system building in the Atlantic, the first of the season to be exact, and it is expected to continue to build in intensity as the week progresses.

This system is still weak, and it began forming to the east of Florida. It is still too early to determine the exact impact that it will have along the coast, but it is already developing tropical traits as we move into the end of the week. This cell still has the chance to become the first tropical depression or named storm of the 2015 Atlantic Hurricane season, even though it may not be considered a completely tropical storm as of yet. If this system continues on the track it’s on, it will be named Ana.

The system that is present has some warm tropical features while still maintaining an overall coolness with non-tropical features as well. Meteorologists are expecting that this storm will not become a powerful system, but there is still a chance for a minimal tropical or subtropical system to form.

Even though this system may not reach tropical storm status, there will be high seas and high winds that will continue to build along the coast from northeastern Florida to southeastern Virginia.

Rough surf has already been reported along the southeastern Florida beaches, but will begin to shift to take on a more northward track on Friday and Saturday. The most activity that we’ll see from this system will occur on Friday and into the weekend, where rain and thunderstorms will crash along the coast along with rough surf, beach corrosion and strong winds. Some stormy weather may even reach Georgia and the Carolinas on Thursday. 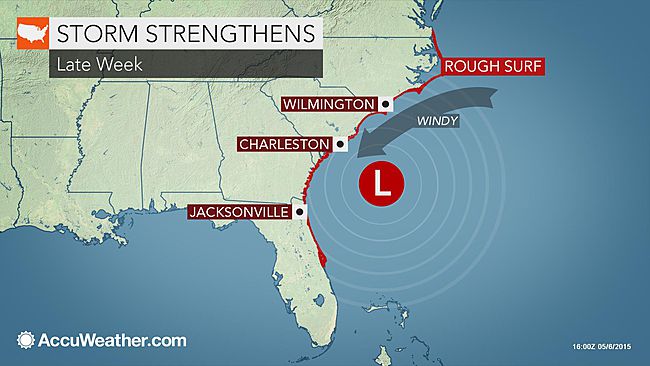 Even though it isn’t set in stone where this will exactly take place, the area’s most likely to see activity are northern South Carolina and southeastern North Carolina. Even Daytona Beach in Florida could be affected by less than favorable beach conditions. The winds with this system could reach about 20-30 mph with gusts around 40 mph along the Carolina and Virginia coasts this weekend.

Residents along the Southeast coast should still take this seriously, as heavy rainfall will be a major concern. Because this system is so slow-moving, it will bring three straight days of rainfall to parts of the Carolina’s and even southeastern Georgia, with the heaviest rain falling during the evening hours. There will be enough rain to cause flooding on roadways and in low-lying areas. An approximation of 2 inches will fall locally, with 4 or more possible.

.There is even a chance that some tornadoes could be produced by this cell. Even though there is small risk for properties and homeowners, it is important that boaters and bathers stay alert. Strong rip currents for bathers and sudden squalls for fishing and small boats will be a continuing concern.

The eye of the storm may reach the coast of Georgia or the Carolinas by this weekend. Even if the center of this system stays offshore, gusty winds, high seas, and downpours can still be expected on the coast due to the way that the weather and conditions constantly change.  Some weak winds may cause the system to head towards the land and hover offshore as we move into the beginning of next week.

It is hard to tell what kind of intensity this storm will have as of yet, because the water temperatures can change quickly.