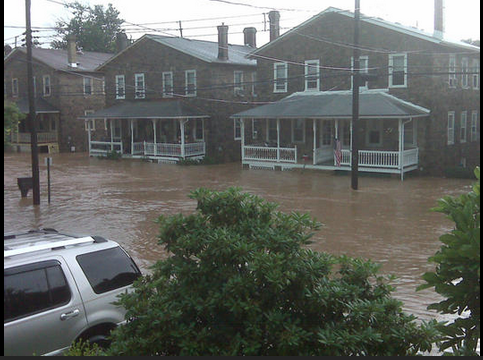 Pennsylvania has been hit with torrential rains early Tuesday morning, with great chances of letting up. Many residents in the Philadelphia have received over 6 inches of rain in some areas. Chester County even had a tornado warning in effect until 7:15 am. The rain was pouring down in the early morning, but died down at about 11:00 this morning. Even though the rain has decreased, some areas around the Philly area are still under the flood stage. Philadelphia’s greater area is still under a flash flood warning until 2:45 pm, stay tuned to your local news station for more coverage on the Doppler radar.
It seems as though the sun is breaking through the clouds and that the worst is over for residents in Pennsylvania.There are still some pop up storms that could make an appearance over the next couple of hours though. Roadways have been flooded, and although the water is decreasing, it is important not to drive over these roads until the water is at a safe enough level. If you try to go through one of these flooded roadways, your car may get stuck in the water and could get whisked away by the flood waters. This is why it is always a smart idea to check your local weather station and avoid any roadways over flown by water. Also, all flights that were scheduled on Tuesday morning coming in and out of the Philadelphia National Airport have been delayed due to the adverse weather. Flights that were scheduled even after noon have been delayed, and things should go back to normal come dusk time.
It is extremely important to have an emergency kit on hand while dealing with adverse weather such as flash flooding, and severe storms. Items such as non perishable goods, matches and candles, flashlights, and even a first aid kit are just some items that would come in handy if an emergency were to come about. If your home has sustained any problems due to water damage, the National Restoration Network of Philadelphia can help you out in no time at all. We can more than likely be out to your location within the hour to help restore your property after water damage. Call us today at 1 (877) 351 – 1910 for all of your restoration needs.