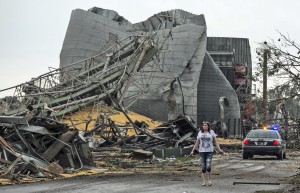 As the folklore states, the small town of Pilger, Nebraska was too close to the Elkhorn River to ever see a tornado. Instead of following this folklore, two tornadoes ripped through the small farming town at the same time. Twin tornadoes are rare, and they spun their way through the town on Monday night, wiping out the towns small businesses and homes. This system completely destroyed the fire station, and leveled about 40 or 50 homes to absolute rubble, according to the Stanton County Sherriff Mike Unger.

Pilger, Nebraska has about 350 residents living there, and about ¾’s of the town has been destructed to rubble and debris. Faith Regional Health Services in Norfolk reported that about 16 people were injured during the storms. This severe system also caused damages in the Nebraska towns of Wisner, Stanton, and Pender. All of these four communities are within 40 miles of one another and about an hour and a half away from Omaha.

The National Weather Service received unconfirmed tornado touch-down reports in Iowa, Wisconsin, and North Dakota. Emergency workers began searching homes in the cities of both Madison and Verona after some possible wind damage there, according to the local police. Fortunately, there were no reports of any injuries or deaths. The threat of severe weather will continue on into Tuesday, the National Weather Service predicts. Anywhere from Montana to New York are at a slight risk of severe storms on Tuesday. This includes a possibility for tornadoes, and no watches or warnings were in effect on Tuesday morning. Employees in the Farmers Co-op rode out the storm in a convenience store’s cooler. The Nebraska state Governor has since issued a state of Emergency for the small town, putting the National Guard on standby to help if it is needed. 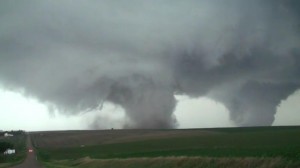 This storm that hit the rural town was just a small part of a larger and more volatile system that began its journey across the nation’s midsection on Monday afternoon. More severe weather is predicted for Tuesday, and the areas that are expected to be hit stretch anywhere from eastern Montana to New York. The National Storm Prediction Center in Oklahoma said that very high winds, large hail, and a few tornadoes are a possibility. These storms are going to be especially strong in Iowa, Wisconsin, and northern Illinois.

Local officials in Stanton County estimate that about 50-70% of Pilger was heavily damaged, if not completely, destroyed. The local school in the area is beyond any repair, and five people had to be rescued from a rural day care center just before the storm moved into Pilger, and the Southern portion of the town was completely in ruin.
A meteorologist with the National Weather Service said that this set of dual tornadoes is quite unusual because they had about the same amount of strength. In most cases, one tornado tends to be more intense and more powerful than the other and the other tornado will usually dissipate as the other strengthens. In this situation, it was not as such. These tornadoes tracked together with the same intensity for a long period of time. This happens in some cases, yet it is not seen very often.

Check out more on this story by clicking here!