Right behind a line of severe thunderstorms stretching from Texas to Georgia that struck on Easter Sunday comes the threat of damaging thunderstorms to portions of the South this week. The bad weather has already struck Texas, igniting thunderstorms across the northern portion of the state and into southwestern Oklahoma. The threat of violent weather will stretch further south by Thursday to reach the Gulf Coast region of the country. The main worries with the severe weather are lightening, damaging winds, heavy rains and hail. There is also a real threat of tornadoes occurring. 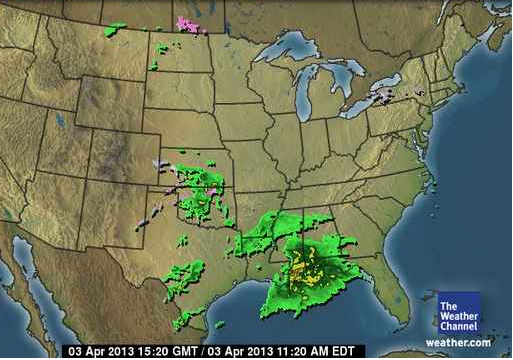 A cold front and low pressure system that swept across Texas early this week is what is creating the threat of severe weather for the South. Portions of southeastern Texas were getting slammed by bad weather Tuesday evening as heavy rains fell and winds gusted up to 60 miles per hour. There were also reports of hail falling in the Austin and Houston areas Tuesday night. Austin Energy reported late Tuesday that 2,000 of its customers were without power because of the stormy weather. A spokesman for the utility company said that severe repair crews and tree-trimming crews were out working to restore power. The turbulent weather system that’s stirring up trouble in Texas is going to cause problems further east and south by Thursday.

The National Weather Service warned of golf ball sized hail and damaging winds Wednesday night for people living in the Brazos Valley region in eastern Texas. That part of the Lone Star State is going to see heavy rainfall all day Wednesday which could very well result in some serious flooding and especially in low-lying areas. Anywhere from between two to four inches of rain could fall on that part of the state by Thursday morning.

The Panhandle of Florida could be hit by some very severe weather Thursday night going into Friday as could the coastal regions of the Carolinas and Georgia. The National Weather Service stated Tuesday that the Deep South is going to experience a lot of very active weather for the month of April. This is because the jet stream has been pushed well into the south, setting up the ideal conditions for severe weather.